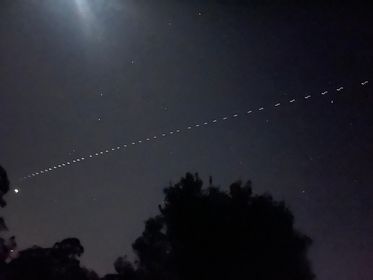 Early risers have spotted some bright lights in the skies about the Sunshine Coast this morning.

The phenomenon has been described as a string of dozens of lights in a row.

Listener Bruce lives at Yandina, and says he saw the lights going over.

"Think there would have been about 20 in a straight line. Evenly spaced. No noise, no other lights like on planes. Strange."

"What the heck are these... lights in the sky. The two at the end moved away from the line and the rest descended and disappeared happened around 5.20am. 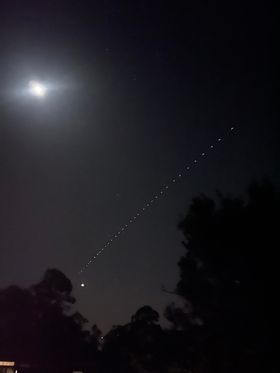 It's believed the lights were the latest launch of Elon Musk's Starlink Satellites.

The tech billionaire's space exploration company SpaceX plans to put up around 1,600 of the devices.

While they may look pretty, Owen Benedict from the Wappa Falls Observatory says the satellites can be a pain for astronomers everywhere.

"Because you've got all these extra things in the sky which are not part of the normal natural sky, it's bad enough with all of the geostationary satellites and everything that are up there, which create provide false star images, and now we're going to have another 1,600 things running around."

He says there are also concerns they may collide and leave tiny debris scattered through the outer atmosphere.

"It's very, very important for people to understand that if a satellite strikes another satellite, you end up with thousands of little shards of rubbish racing around and that can collide with other satellites, and the prediction is that within 10 years all lower Earth's orbit will be useless."