Mariners urged to avoid new southern bar at Bribie Island - Severe erosion has occurred at the new south bar at Bribie Island with mariners advised to avoid the area due to a large amount of floating debris, ...
Multi-million-dollar splash park upgrade opens at Nambour Aquatic Centre - Nambour Aquatic Centre&rsquo;s 385sq m splash pad with two toddler slides, 20 water jet features and tipping buckets will open on Saturday to he ...
Omicron-related deaths 'are yet to peak' - It will be several weeks before deaths and hospitalisations from the Omicron variant reach their peak, despite plateauing COVID-19 cases, the nation's ...
Local businesses close as COVID causes staff shortage - Many Sunshine Coast businesses have been forced to temporarily shut up shop or reduce hours, as a spike in COVID cases leads to staff shortages. B ...
Three dead as Tonga island homes destroyed - All the homes on one of Tonga's small outer islands were destroyed in the massive volcanic eruption and tsunami, with three people so far confirmed de ...
Hundreds treated through 'virtual COVID ward' as cases continue to surge - Hundreds of COVID-19 patients are being cared for by the Sunshine Coast Hospital and Health Service, from the comfort of their own homes. As of yes ...
No new homemaker centre for Noosa - A large homemaker-style centre in Noosa, that would have featured shops like Spotlight and Anaconda, has been knocked back by the The Planning and E ...
Hobart in tight win, earn BBL finals spot - The Hobart Hurricanes have snatched a six-run win over Melbourne Renegades to secure their place in the BBL finals, derailing a chase that Aaron Finch ...
Tonga damage slowly comes to light - Knocked over shipping containers at Tonga's Nuku port, and volcanic ash covered houses and runway at Ha'apai airport show some of the destruction wrou ...
Queensland records 16 COVID-19 deaths, the state's deadliest day - Sixteen people have died from COVID-19 in Queensland overnight, making it the state&rsquo;s deadliest day since the pandemic began. Eight of th ... 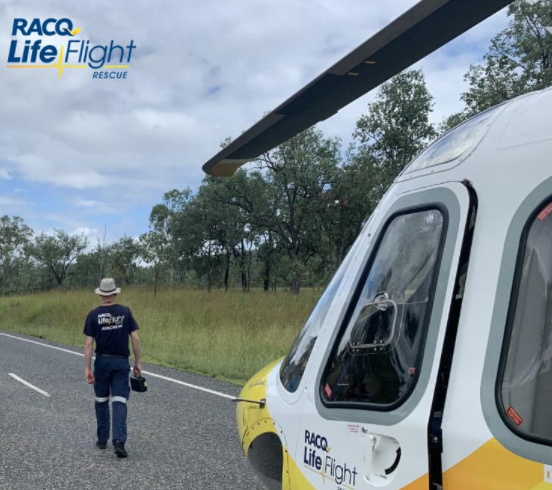 A father and his young daughter have spent two nights clinging to a tree, surrounded by deep flood water in the Gympie region.

The pair became stranded between two sections of flood water on Friday night, with the man telling rescue crews the water began filling their car.

He and his primary-school-aged daughter climbed onto the roof of the vehicle, but were swept into the water in the darkness.

Thankfully, they were washed into a tree, which they managed to hold on to through out the weekend, without anyone knowing where they were.

The man says on the first night, he swam back to the submerged car and grabbed a rope, which he used to tie himself and his child to the tree, so they wouldn’t be washed away.

When the water subsided yesterday morning, the pair carefully climbed down more than 10 metres to the ground and made their way to a nearby homestead to raise the alarm.

They had suffered exposure, dehydration and a lot of insect bites.

The Toowoomba-based RACQ LifeFlight Rescue helicopter crew has since airlifted a father and his young daughter to hospital for further medical attention.

It was the second flood-related mission in the Gympie region for the Toowoomba chopper crew.

On Saturday, the recue helicopter airlifted a man who had been injured after driving into floodwaters in the early hours of the morning.

The man in his fifties managed to get out of his vehicle and walk for approximately a kilometre, until he was able to find a house and call for help.

He was airlifted to Sunshine Coast University Hospital, suffering back injuries.