A bold plan has been unveiled for a multi-purpose entertainment centre in the Maroochydore CBD to capitalise on the 2032 Olympic and Paralympic Games and beyond.

A new facility has been earmarked for the Sunshine Coast to host preliminary basketball at the 2032 Games, and Fairfax MP Ted O’Brien is proposing it be built in the Maroochydore CBD..

“My vision is for the Maroochydore CBD to host the region’s most iconic building – a multi-purpose entertainment centre that can be used for major sporting events, performing arts, conventions, exhibitions and possibly even eSports,” Mr O’Brien said.

“We’ve secured the 2032 Games and we can’t undersell ourselves, but we have to be smart.

“Catering for basketball is vitally important, but let’s go for something truly compelling and to my mind that’s an iconic entertainment centre in the new CBD.” Marchese Partners and RWA Sports Architects, who bring significant sports, entertainment and mixed-use expertise, including experience in designing Olympic venues, are keen on the idea.

Marchese Partners principal Frank Ehrenberg said that a major entertainment centre in the Maroochydore CBD would provide incredible value to the region.

“Such a venue would create a legacy and add significant value to the community and its people while contextually responding to the region,” Mr Ehrenberg said.

“We came up with a concept that would provide an entertainment facility to accommodate international standard performing arts such as opera, ballet, musicals, and theatre as well as a range of other activities.

“Further to this, the venue would include flexible spaces to be adopted for the Olympics including a basketball arena which could accommodate up to 6,000 people.”

From today, Mr O’Brien will take the conceptual drawings and present them to key industry and business leaders to galvanise support for the project.

“By unveiling this vision today, I hope to trigger a conversation about the ‘art of the possible’ and encourage others to start thinking about possible legacies of the 2032 Games,” he says. 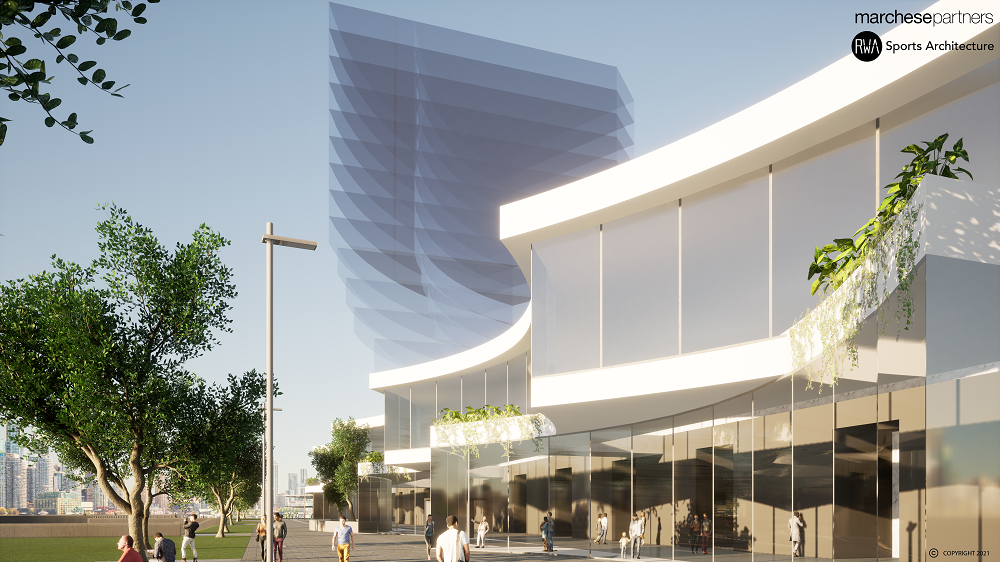