Heavy rainfall leading to localised minor flooding across the Sunshine Coast - Heavy rain is leading to localised flooding at rivers and creeks across the Sunshine Coast.The Bureau of Meteorology says rainfall totals of 20-130 ...
Hazell Bros secures $6.53m contract for Noosa landfill expansion - Noosa Council has awarded a $6.53 million construction contract for the Eumundi-Noosa Road landfill expansion, which it says will ensure the region& ...
New govt inquiry will scrutinise big tech - Social media giants will be forced to explain what steps they are taking to keep Australians safe on their platforms, as part of a new inquiry.
Severe thunderstorm warning for Sunshine Coast, Noosa - UPDATE: 2.15PM Thunderstorms over the Sunshine Coast have recently moved off the coast, and there are currently no severe thunderstorms over the wa ...
Queensland border reopen plan on track despite Omicron fears - Queensland&rsquo;s roadmap to reopen this month remains on track with Premier Annastacia Palaszczuk saying she will wait for advice on the new O ...
Sian's Law to keep child killers behind bars for longer - Sian's Law has passed in Queensland overnight, to keep the "worst of the worst" killers behind bars for longer. The amendment to the Corr ...
Police search for two women following Rainbow Beach break-in - Police are hoping the public will be able to identify two women, accused of breaking into a Rainbow Beach home. The women allegedly managed to get in ...
States hold line on Omicron lockdowns - Prime Minister Scott Morrison used Tuesday's national cabinet to urge state and territory leaders to stick to their reopening plans, despite Omicron r ...
Fifth Omicron case confirmed in NSW - Genomic sequencing has confirmed a woman infected with coronavirus who flew into Sydney last week carried the Omicron variant into the community with ...
Sunshine Coast house prices surge more than 30 per cent - House prices have spiked by more than 32 per cent on the Sunshine Coast during the past year with cheap access to credit, lifestyle, low interest ra ... Live music lovers on the Sunshine Coast will soon have a new venue to call home.

A Nambour music store has revealed ambitious plans to transform part of its warehouse into the region’s newest live-music venue.

Big Audio owner Phil Turvey says he will open the doors to his new Bury St venue early next year, which will include a large garden bar for acoustic performances, an indoor bar and entertainment area and a kitchen specialising in pizza and crepes.

Construction is underway on the 300sq m site and the plans have been given a massive boost thanks to a $53,368 Federal Government grant.

Mr Turvey said that he was "over the moon" when Fairfax MP Ted O’Brien gave him the good news.

“This is a game changer for us, and it moves us so much further down the track,” Mr Turvey said.

“This venue will be all about providing a platform for local original music to thrive on the Sunshine Coast.”

“Unfortunately, there are not a lot of live music venues left on the Coast, despite the public and the industry screaming out for more options.

“That’s why we are so excited to open our doors early next year and plug live-music straight back into the lives of locals in an effort to bring a vibrant night time economy to Nambour.” 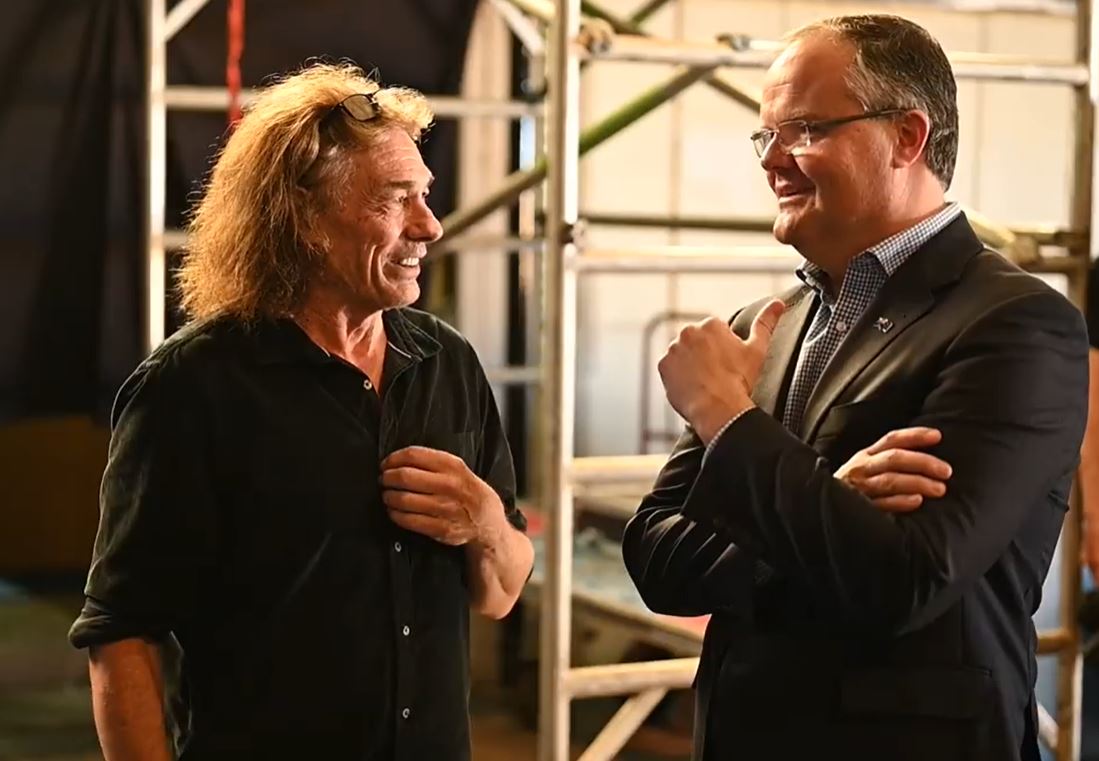 Mr O’Brien says that the funding boost was not just a major win for Nambour, but a real showstopper for the live-music sector on the Sunshine Coast.

“The stage is set for Nambour to amplify its reputation as a live-music and arts hub on the Sunshine Coast,” Mr O’Brien said.

“It’s no secret that the past two years have been incredibly difficult for the live-music industry, but today’s announcement is another sign that the music is back.”

“I am delighted to support Phil and his new venture which will provide so many opportunities for the local music scene.”

Big Audio will feature everything from acoustic sets, blues, country and rock ‘n’ roll to cover bands and Sunday sessions.

With more than 20 years’ experience in the industry, including long-time support of the Woodford Folk Festival, Phil says that he has tapped into what people want and cannot wait to deliver it.

“I know what entertains people because I’ve seen what people like and what flavour to put out there,” Mr Turvey said.

“That’s what this venue is all about – entertainment.”

Big Audio will be the first venue to open in Nambour under the Sunshine Coast Council’s designated Special Entertainment Precinct regulations, which enables the business to be exempt from the amplified music noise requirements of the State Government’s liquor licensing laws.