Serious assault, wounding – Maroochydore - Sunshine Coast detectives have arrested two people in relation to a serious assault on Sunday in Maroochydore which resulted in three people sustain ...
Victoria ends lockdown five days early - Haircuts as well as a parma and pot are finally back on the menu for fully vaccinated Victorians.
Drop in testing worrying ACT Health - ACT health authorities are worried about a sharp drop in COVID-19 testing numbers, with figures more than halving compared to a week earlier.
Mental health boost as NSW reopens - Since the beginning of the COVID-19 pandemic, self harm and eating disorders in NSW have been on the rise.
Teen among seven Victorian virus deaths - A COVID-positive teenager with other health conditions has become the youngest person to die during Victoria's current outbreak, while police have squ ...
NSW clears 80 per cent full vax hurdle - NSW has reached its target of 80 per cent full vaccination for people aged over 16, clearing the way for a further easing of restrictions.
US to accept visitors with mixed vaxxes - The US Centres for Disease Control and Prevention (CDC) says it will accept mixed-dose COVID-19 vaccines from international travellers, a boost to tra ...
Flexibility key to worker happiness: study - Flexible workers are happier workers it seems. New research shows they feel better rested, more engaged and have a higher sense of wellbeing than thos ...
Australians first under NSW quarantine end - Fully vaccinated Australians and their families will be the first people to benefit when NSW scraps quarantine for international arrivals.
Koalas join queue for chlamydia jabs - Researchers hope a new vaccine to protect koalas against the ravages of chlamydia could boost long-term survival prospects for the species. 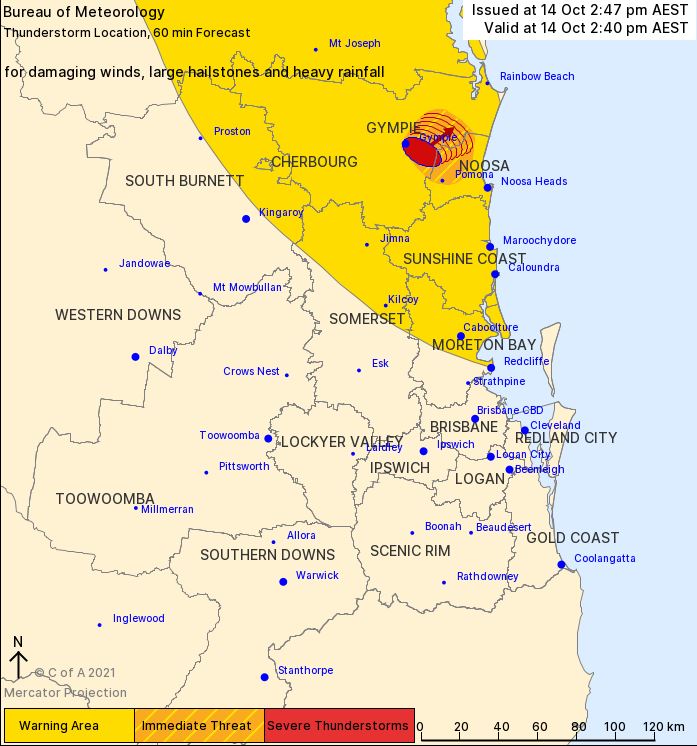 The Bureau of Meteorology warns that, at 2.10 pm, severe thunderstorms were detected on the weather radar near the area southeast of Gympie.

These thunderstorms are moving towards the southeast.

They are forecast to affect Cooran by 2.40pm and the area northwest of Noosa Heads, Pomona and Kin Kin by 3.10pm.

The weather bureau says an active trough extends north into southeast Queensland from a cold front along the east coast.

“The trough will combine with a strong winds associated with an upper trough leading to the development of severe thunderstorms this afternoon and evening,” the weather bureau reports.

“Severe thunderstorms are likely to produce damaging winds, large hailstones and heavy rainfall that may lead to flash flooding in the warning area over the next several hours.”

Locations which may be affected include Maroochydore, Gympie, Caboolture, Hervey Bay, Cherbourg and Redcliffe.

Queensland Fire and Emergency Services advises that people should:

* Move your car under cover or away from trees.

* Avoid using the telephone during a thunderstorm.

* Beware of fallen trees and powerlines.