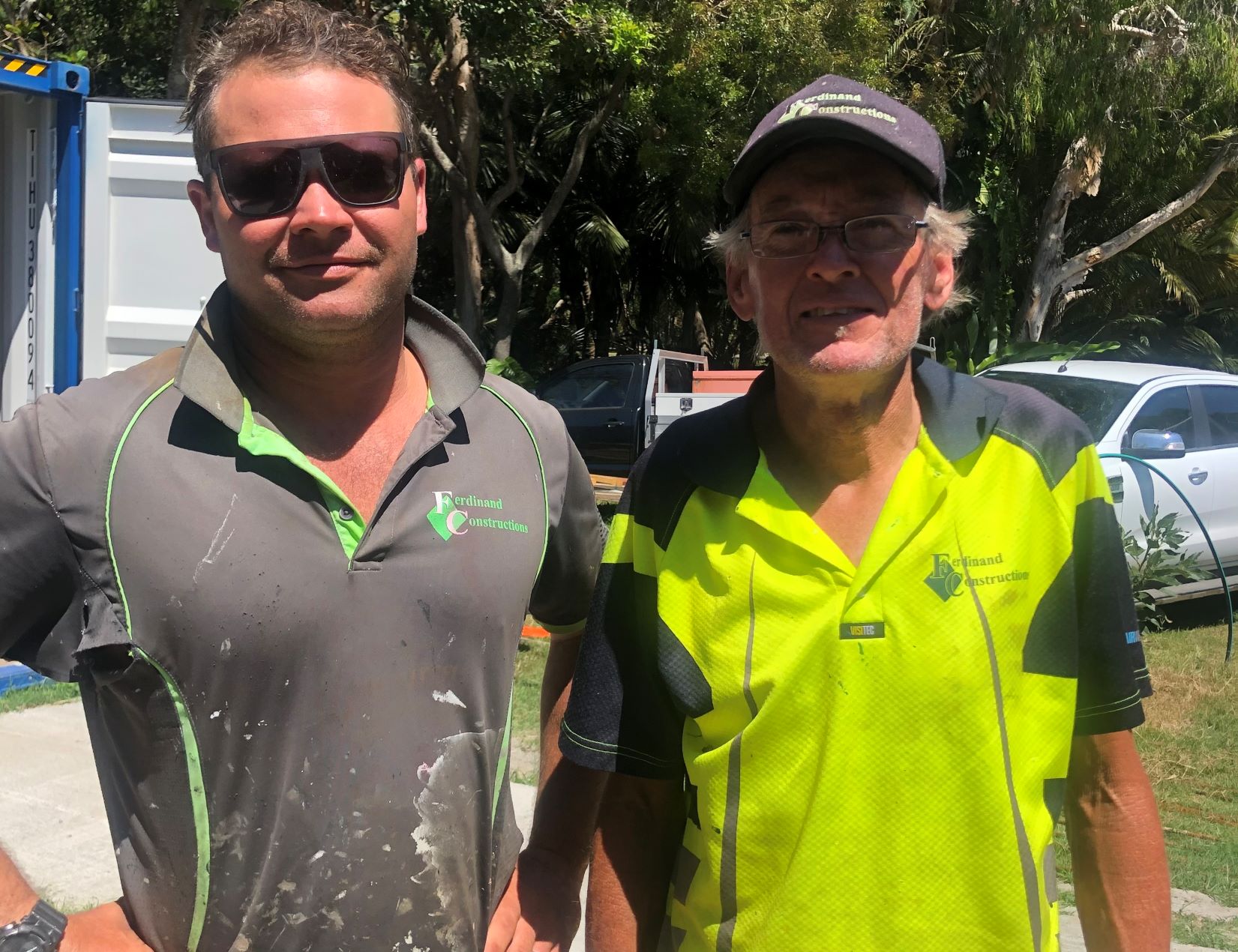 The last thing construction worker Paul Ferdinand expected to do yesterday afternoon was to help save a young woman from bleeding to death on Blacks Beach.

Mr Ferdinand, owner of Sunshine Coast-based Ferdinand Constructions and carpenter Gav Odgaard were working on a home near the beach when they heard her screaming out for help around 11:45am.

Kaitlin Jones - a 23-year-old Mackay hairdresser - had just been allegedly stabbed multiple times in her head, neck, arms and legs while she was sunbaking.

Mr Ferdinand looked toward the beach and saw Ms Jones crying, screaming and folded over as if she was holding a baby.

She was covered in blood. 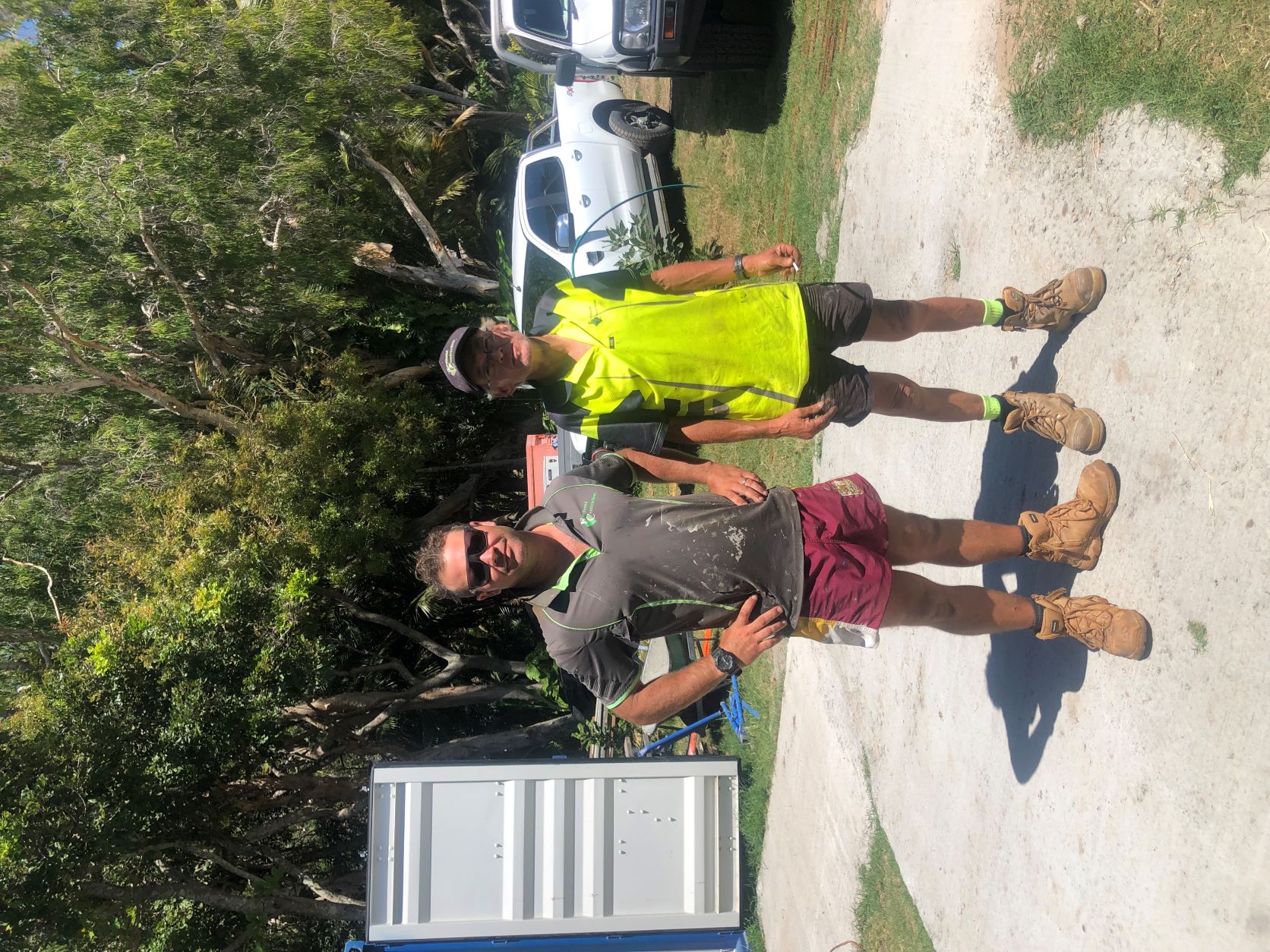 "Before the cops got here, Gav was sort of pressing on her wounds and looking after her, and we got her a pillow and just tried to sit her up and calm her down," Mr Ferdinand says.

"She just repeated that she didn't want to die, that was the only thing she was saying."

The two heroic tradies applied first aid before paramedics - including a critical care unit - and police arrived about 12:20pm.

Mackay Detective Inspector Tom Armitt says the work the pair did to help save Ms Jones was honourable.

"It was something that they wouldn't have expected to occur at all in the nature of their day-to-day work and for them to respond so quickly and provide aid in the way that they did was commendable," Insp Armitt says.

Mr Ferdinand admits he does not know what would have happened if no one had seen her or had helped.

There had been no witnesses and no other people on the beach when Ms Jones was randomly attacked.

Stabbing "not an indication of a lack of safety" in Mackay Locals are being told they should not feel unsafe to travel alone in Mackay after the incident.

Police have today provided an update on Ms Jones, who is currently in the intensive care unit at Mackay Hospital.

Insp Armitt says these sorts of incidents are rare and is "not an indication of a lack of safety" in Mackay.

"As far as any sort of public response, the last thing that we want is for people to think that they are restricted in their movements and aren't safe," Insp Armitt says.

"These sorts of things are an exception, they happen so rarely, the fact that it has happened here is devastating."

Ms Jones is recovering with non life-threatening injuries but Insp Armitt says she will likely have significant scars, both physically and mentally.

"The lacerations were quite deep - we are also concerned for her ongoing mental welfare, it would have been a harrowing experience, and quite frightening," he says.

A 16-year-old boy will face court today after police were told he had presented to a local solicitor firm, after the alleged stabbing.

He has been charged with acts intended to cause grievous bodily harm.

Insp Armitt says despite the charges, the investigation is ongoing.

"That's still part of our ongoing investigations as to what would have motivated a young person to do something like this so we are still following up on the background of this young person," he says.

Ms Jones told police the alleged offender was unknown to her, she did not know the boy and had never met him before.

The 16-year-old has been refused bail and will appear at the Mackay Children's Court today.