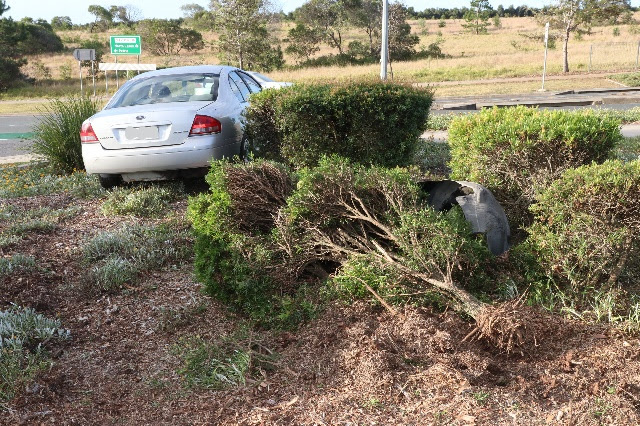 The dog squad has led police to two men, accused of fleeing the scene after a car crash south of Caboolture.

Police say a silver Ford Falcon bearing stolen plates veered off the roadway at Kerr Rd West in Dakakin around 1.40pm on Wednesday, striking a light pole and a number of shrubs before coming to a stop in a garden bed at the corner of Kerr Road.

Two occupants allegedly ran off, trespassing through multiple properties, before one went inside a nearby residence and assaulted a 43-year-old male occupant, punching him in the face multiple times.

Police attended the scene, with two police dogs, PD Gator and PD Beau, deployed to track down the men.

The alleged driver jumped a back fence and was pursued by PD Beau along Tamarin Court before jumping into a box trailer in an attempt to flee.

He was taken into custody on scene.

PD Gator continued to track the male passenger through bushland, and into the Dakabin waste facility, before locating the man concealed in long grass in further bushland and apprehended him with a controlled bite to the calf.

The 35-year-old man was transported to hospital where he was assisting police with their inquiries.

Meanwhile a 23-year-old Dakabin man has been charged with two counts of stealing and one count each of assault occasioning bodily harm, burglary, failure to comply with duties of driver involved in crash, possess things used in commission of an offence, obstruct police and trespass.

He is also charged with 'serious assault person in pursuance of unlawful conspiracy' following an incident on August 7 where he allegedly tried to leave a Morayfield South supermarket without paying for grocery items.

When a female store attendant tried to stop him, the man allegedly claimed to have COVID-19 before deliberately coughing on her.