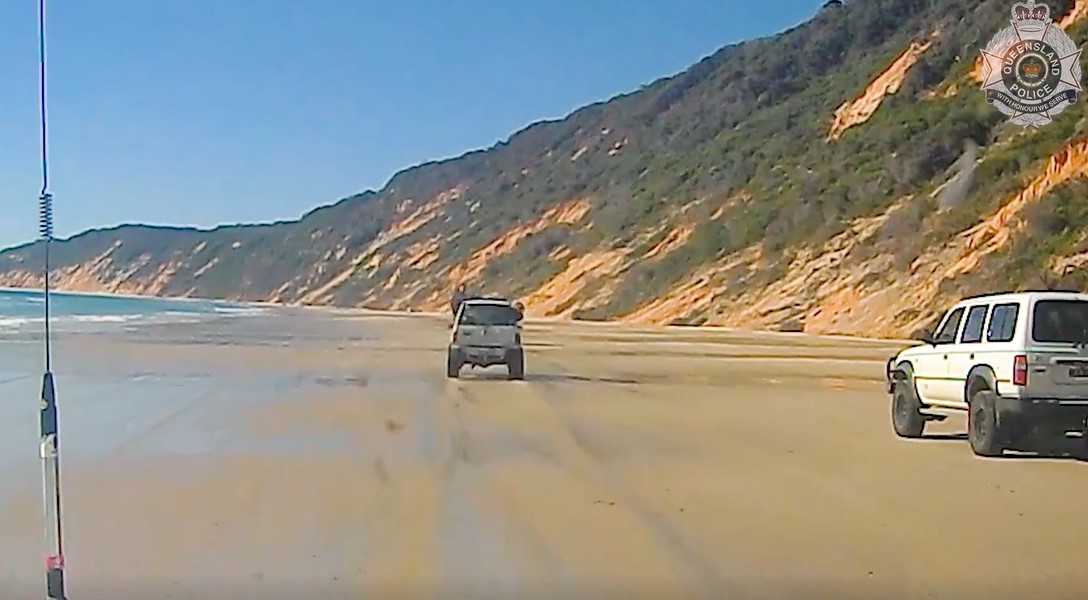 Hoons created a makeshift dragstrip at Teewah Beach so they could do burnouts at low tide while people were driving along Rainbow Beach while sitting on their window sills to take selfies.

On Saturday, police witnessed hoons using witches’ hats and glow sticks to lay out a course for drivers to speed through at low tide at Teewah Beach.

Police returned on Saturday night and issued notices to appear for drink driving, driving without due care and attention and speeding offences.

On Sunday, police caught a 20-year-old male driver and his female passenger sitting on the window sills of either side of their vehicle as they travelled along Rainbow Beach.

When questioned, the pair told police they had been trying to take a “good photo”.

The man was issued with a notice to appear for dangerous operation of a vehicle, and the 22-year-old woman was fined for not wearing a seatbelt.

Officers received further complaints from people at campsites nearby who had camera vision of motorists conducting burnouts, resulting in additional infringements notices being issued.

Three vehicle rollovers were also reported across the weekend but with no injuries.

“Look this is just the height of stupidity – sitting outside the vehicle so you can get a nice photo of themselves is just ridiculous. At any stage, they could have fallen out and they would be a statistic,” Insp Swindells says.

“Hooning on beaches not only puts the occupants of the vehicle at risk of serious injury, but also the lives of innocent campers.

“Families have the right to enjoy our local beaches without fear of anti-social behaviour or vehicles being driven at unnecessary speeds.

“Police will continue to be out in force over coming weekends targeting hooning and will not hesitate to take necessary action against repeat offenders.”