A group of tipsy Melbourne visitors in Noosa have unknowingly hitched a ride to Hastings Street with a former Australian Prime Minister after mistaking him for an Uber driver.

The group of four approached Kevin Rudd’s car after they thought he was their Uber driver during wet weather on Tuesday night.

It took them half the length of their journey to work out who the man behind the wheel was.

Mr Rudd confirmed on Twitter that he did drive the group, saying: “Guilty as charged. Four young Melburnians getting drenched in a Queensland subtropical downpour at Noosa last night with no Uber in sight …

His daughter, Jessica Rudd, also took to Twitter to say he dropped off his family at a Noosa restaurant and then went to find a park.

“Then I thought I saw some people pile into his car, told myself it wasn’t – must be a similar looking Uber,” she tweeted.

“The lovely but tipsy crew had been at the restaurant for lunch and asked for a lift to Hastings Street. Said they’d pay.

“He said he would give them a lift. Took them half the ride to discover who their driver was.” 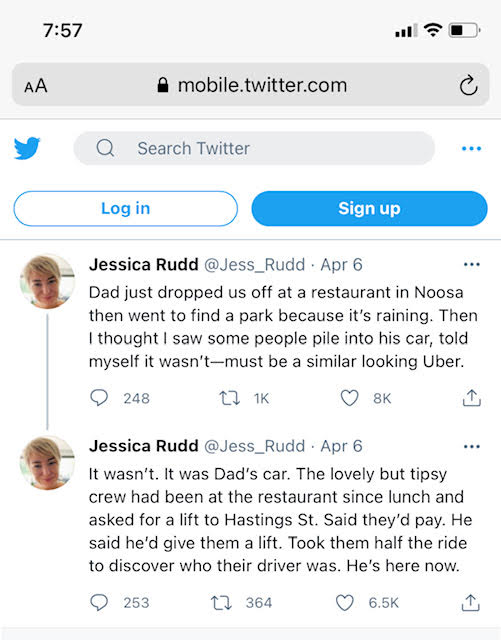