Queensland police make wish come true for terminally ill girl - Flying in a police helicopter and arresting someone might seem scary to other seven-year-olds, but for Savannah Burns it is a dream come true. Trag ...
Australia posts record $10b trade surplus - Australia posted the biggest monthly trade surplus in history as the economy continued to rack up records in a marked rebound from last year's deep re ...
Three cheers to local brewery at state beer awards - A local brewery has taken out three gongs at this year's state Beer Awards. Moffat Beach Brewing Co has been named the best place to get a beer bre ...
Frontline nurse the first on the coast to get the Pfizer vaccine - Emergency department nurse Sasha Ritchie has made history today, rolling up her sleeve to be the first healthcare worker on the coast to be vaccinat ...
Bridge replacements and fire trail upgrades for Cooloola Coast - A helping hand for bushfire affected communities, with $10.7 million set to be handed out to 21 resilience projects across the state. More than $ ...
Meghan accused of 'bullying royal staff' - Meghan, the Duchess of Sussex, has been accused of bullying staff and "destroying" one individual, ahead of her "tell-all" televis ...
Tassie devils beating devastating disease - Scientists have for the first time quantified the toll of a deadly facial cancer disease which has decimated the Tasmanian devil population.
SA to get first AstraZeneca virus vaccines - South Australians will be the first in the nation to get the AstraZeneca coronavirus vaccine option.
Tax driver and bikie shot in Sydney - A taxi driver has managed to drive himself to hospital after he was caught up in the brazen daylight shooting of a bikie outside at a home in Sydney's ...
ICAC-bound NSW MP moves to cross bench - Embattled former NSW minister John Sidoti has moved to the cross bench after the state's corruption watchdog announced it would hold a public inquiry ... 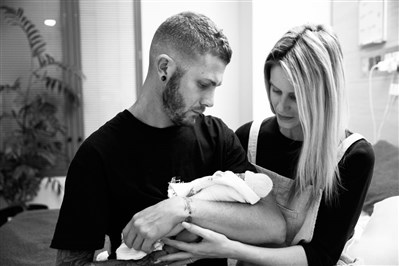 It has been two years since the unimaginable happened to a Eumundi couple, whose baby was stillborn at 30 weeks.

Ivy-Winter was born sleeping at the Sunshine Coast University Hospital.

Her parents, Grace and Chris, were given a 'cuddle cot' to keep their daughter close to them for another 24 hours.

Time hasn't dimmed the pain, but now the couple wants to ease the burden for other families going through such heartbreaking loss.

In honour of what would be Ivy-Winter's second birthday, Grace has started a fundraiser to help purchase cuddle cots - that cost more than $6000 - for regional hospitals across Queensland.

The specialised cot is a refrigerated bassinet that keeps stillborn babies cool so their parents can spend more time with them.

"In hospital I was told that the cuddle cots needed to be donated because not every hospital has them," Grace tells us.

"They are usually donated in memory of other babies.

"It would be really beautiful to be able to give back and ease the pain of other families who unfortunately will go through the same thing."

The Stillbirth Foundation of Australia says one in every 135 babies born will be stillborn.

It is a rate that has not declined in two decades, despite medical advances.

You can donated by visiting cuddlecot.gofundraise.com.au