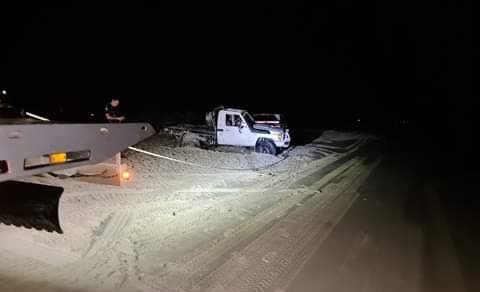 Two teenagers have been airlifted to hospital after their 4WD flipped at Teewah Beach.

The crash happened around 6:50pm on Saturday night, with ambulance crews and two rescue helicopters sent to the scene.

One male in his late teens was taken to the Royal Brisbane and Women's Hospital in a serious condition with head and arm injuries.

The crash follows a second nose-to-tail incident on the beach the preivous night, prompting a warning from the tow truck company that attended both scenes.

"Both crashes appearing to be P-platers, providing a reminder, especially for newer drivers, the beach deserves respect, and at night a lot more," it reads.

Clayton's Towing says the vehicle from Saturday night's crash has been seized by police for further investigations.