Additional charge laid over Cootharaba stabbing - A 60-year-old man is due back in Maroochydore Magistrates Court today, charged with an additional offence over an alleged domestic disturbance that ...
Missing woman last seen at Sunshine Plaza - Police are appealing for public assistance to help locate a 36-year-old Buderim woman. Jennifer English (pictured above) was last seen at Sunshine ...
Vic has five virus deaths, 15 new cases - Victoria has had another five coronavirus deaths, taking the state toll to 771 and the national figure to 859, as new cases dropped to 15.
SA preparing for midnight opening to NSW - South Australia's borders are set to open to NSW at midnight if there are no new cases of community transmission of COVID-19.
Some stranded whales saved in Tasmania - At least 25 pilot whales involved in a mass stranding on Tasmania's remote west coast have been guided back out to sea.
Search for missing Sunshine Coast man in Far North - (Image supplied: QPS) A search operation is underway in Cooktown after a 59-year-old Sunshine Coast man was reported missing in the area on Mond ...
Melbourne stays 'on track', says Andrews - Melbourne is "absolutely on track" to have its coronavirus restrictions eased next Monday, despite Victorian new cases jumping to 28.
Qld extends border bubble 100km into NSW - Queensland will shift its border zone 100km further south from next weekend, throwing open the door to residents in five more NSW council areas includ ...
Face masks block half of cough aerosols - Even the poorest performing face masks filter at least 50 per cent of aerosols released by coughing, Australian researchers say.
Warning over second domestic violence wave - Women's legal experts have forecast a surge in demand for domestic violence services when financial coronavirus support is wound down. 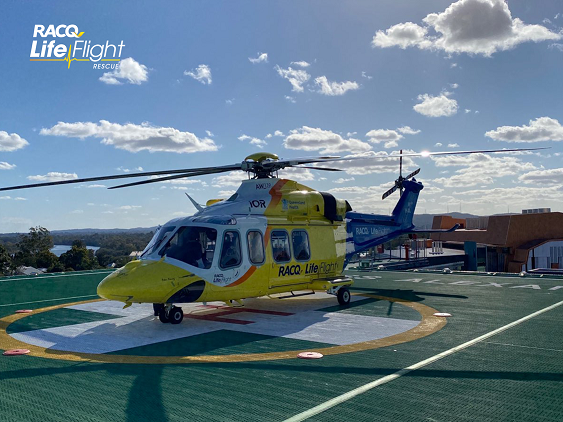 A man has been airlifted to hospital after his fingers were partially severed by a circular saw.

The man was reportedly using the power tool at a private property in the South Burnett, when the blade sliced through at least one of his fingers and his thumb and caused serious injury to several other fingers.

The Sunshine Coast RACQ LifeFlight Rescue helicopter was sent to the property at around 1.15pm on Saturday, September 12.

The pilot landed the aircraft near a local hospital.

The patient, aged in his seventies, was treated at the scene and transported by Queensland Ambulance Service (QAS) officers, before being transferred to the waiting rescue chopper.

He was flown to Princess Alexandra Hospital in a stable condition, under the care of the RACQ LifeFlight Rescue Critical Care Doctor and QAS Flight Paramedic, for specialist medical treatment.