NSW urged to limit activity, 11 new cases - NSW Premier Gladys Berejiklian is urging young adults to rein in their social lives after a COVID-positive man attended a football match and six Newca ...
NSW chemical pile different to Beirut: PM - Prime Minister Scott Morrison has hosed down concerns Australia is at risk of a similar explosion to the catastrophe that killed at least 137 people i ...
Police believe missing girl could be on the Sunshine Coast - Police are appealing for assistance to locate a 12-year-old girl missing from South Brisbane. She was last seen at a Hinterland Crescent address in ...
Business backs further JobKeeper revision - Business groups believe the federal government's latest JobKeeper changes aimed at virus-hit Victoria will ensure more people stay in work.
Search for dog attack witness - Sunshine Coast Council is calling for witnesses to a dog attack in Albany Street, Sippy Downs on July 15. A Border Collie was reportedly attacked b ...
New COVID-19 testing clinic in Noosa - A new, mobile, COVID-19 testing clinic is now up and running at Noosa. The fever clinic allows locals and visitors who are showing cold or flu-like ...
Man critical after crashing into pole at Imbil - A young man is fighting for life after crashing into a pole at Imbil. The man in his 20s was flown to hospital Royal Brisbane and Women&rsquo;s ...
Victorians urged not to panic buy meat - Victorians are being urged not to panic buy meat as the state's abattoirs cut back operations, under industry restrictions to help slow the spread of ...
Treasury predicts bleaker economic outlook - The Morrison government has hinted that it will undertake further stimulus after Treasury painted an even bleaker outlook for the economy as a result ...
Leaders play down food shortage fears - Political leaders have sought to reassure Australians about the food supply amid tough new restrictions to tackle the spread of coronavirus. 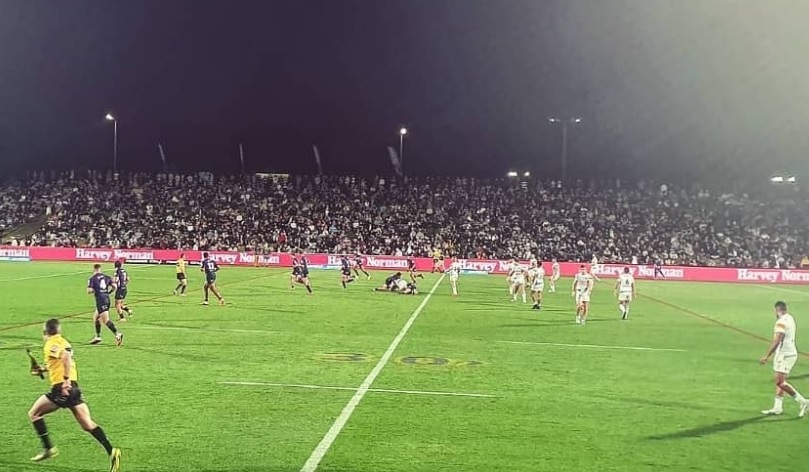 NRL fans will notice some changes at Sunshine Coast Stadium at the next big clash on August 2.

Spectators were seen sitting too close together on the hill and ignoring announcers' instructions as they tried to stagger people's exit at the end of the match.

Stadium manager Simon Ball said the Sunshine Coast could lose the opportunity to host NRL games, if fans continued to do the wrong thing.

"Social distancing is everyone's responsibility, it's not just the stadium's responsibility, so we would really hope that the next game people do take heed of the warnings and keep that distance where they can.

"We probably just ask people to come early to the game and be prepared to wait for the exit, and also be mindful of where they are standing in queues and giving each other a bit of space," he said.

The Storm was set to take on the Newcastle Knights in the Purple Army's next "home" game at the Sunshine Coast Stadium on August 2.