Mistakes laid bare in Ruby Princess report - When COVID-infected passengers were allowed to disembark the now-infamous Ruby Princess cruise ship in Sydney the errors were inexcusable and inexplic ...
Youngest COVID-19 death as Vic passes peak - Victoria has passed the peak of its second coronavirus wave but authorities remain concerned more aged care residents will die.
Three additional COVID-19 cases in Queensland - Queensland Health has announced three new COVID-19 cases, bringing total cases to 1,092. None of the cases are currently considered to be a risk ...
Helping hand for bushfire-affected regions - More cash is now available for communities hit hard by the summer bushfires. Premier Annastacia Palaszcauk said while the coronavirus pandemic was ...
Jet skier spends night adrift at sea - A 42-year-old man has spent the night stranded on his jetski, after running into trouble off Moreton Bay. The alarm was raised around 10.45pm on Th ...
Wayward emu captured in New Jersey - A wayward emu was taken to an animal shelter after it was captured while running through the streets of a northern New Jersey city.
China find virus in food packaging - Two Chinese cities have found traces of the coronavirus in imported frozen food and on food packaging, raising fears that contaminated food shipments ...
Elderly woman becomes 53rd NSW virus death - NSW has recorded its first COVID-19 death in more than 10 days after an elderly Sydney woman linked to the Our Lady of Lebanon Church cluster died.
Vic takes over COVID-19 aged care homes - The Victorian government has assumed control of three aged care facilities in Melbourne's west to stem growing COVID-19 outbreaks.
PM promises to address aged care failures - Prime Minister Scott Morrison has insisted aged care failures will be addressed as the federal government comes under immense pressure over deadly cor ... 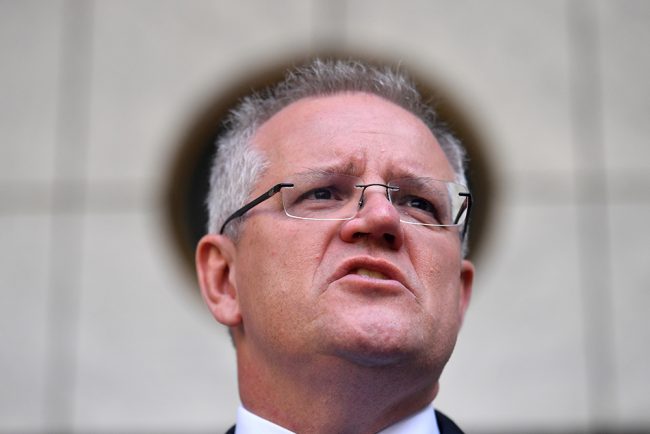 JobKeeper will be extended to a 12-month scheme but reduced in two stages as part of the federal government's overhaul of coronavirus support.

Wage subsidies will be cut from $1500 to $1200 a fortnight for eligible full-time workers after September 27 and halved to $750 for those working less than 20 hours a week.

From January, JobKeeper will be further reduced to $1000 for full-time employees and $650 for part-time workers until March.

At both stages, businesses will have to requalify for the scheme by demonstrating a significant drop in revenue.

Companies with less than $1 billion in turnover will need a 30 per cent fall in revenue, while the threshold is 50 per cent for large companies.

The coronavirus supplement for JobSeeker will also be extended but drop from $550 a week to $250 at the end of September, and remain at that rate until the end of the year.

That will put the base rate of unemployment benefit at about $815 a fortnight, however, but recipients will be able to earn $300 without it affecting their payment.

The future of the permanent dole rate is expected to be revealed in the October 6 budget.

Prime Minister Scott Morrison indicated JobSeeker was unlikely to return to its pre-pandemic level of $565 a fortnight at the start of next year.

"I am leaning heavily into the notion that we would anticipate, based on what we know right now, that there obviously would need to be some continuation of the COVID supplement post-December," he told reporters in Canberra on Tuesday.

#JobKeeper will be extended by six months to the end of March next year and the temporary supplement for those on income support will also be extended until the end of the year, we’ve just announced #auspol #breaking pic.twitter.com/QfA4lLte0Y

Mutual obligation requirements for people on JobSeeker will return from August 4, with the assets test to be reintroduced from the end of September.

"They know a current scheme that is burning cash, their cash, taxpayers' cash to the tune of some $11 billion a month cannot go on forever," the prime minister said.

Around 3.5 million workers have received wage subsidies designed to keep employees linked to employers during the pandemic.

Labor leader Anthony Albanese said JobKeeper excluded some casual workers and migrants, while also paying 875,000 people more than they were earning before the crisis.

"Labor remains concerned that too many people are being left behind," he told reporters on the NSW south coast.

He said the government should have taken the opportunity to announce a permanent increase in unemployment benefits.